There are certain things which are meant to be experienced at least once in a lifetime. I don’t know about you, but going on a cruise definitely figures on my list of such things! I was fortunate enough to get such an opportunity some time ago. The very fact that it was something quite unexpected definitely heightened the charm.

The cruise liner was the SuperStar Virgo and it was to be a two-night round trip from Sentosa Island, Singapore, to Kuala Lumpur, Malaysia. The port at Sentosa was a hub of activity as boarding time approached. Every where I looked there seemed to be people and bags and more people and more bags! 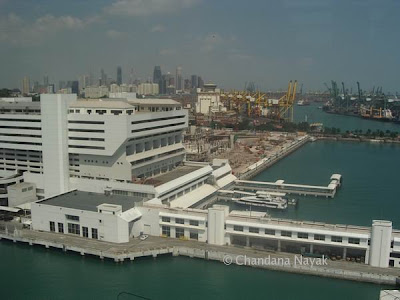 Finally we were at the check-in counters where smartly-uniformed, courteous staff collected our passports. We were then handed our room keys and a credit card of sorts which would double as our ID and charge card for the duration of our stay on board. The demeanor and prompt service from the crew is something that I have yet to see surpassed.

One look at the ship’s magnificent lobby and I made up my mind to begin exploring at the earliest. With more than 10 decks and a profusion of entertainment and fun at our disposal, two days did not seem like enough time to walk the entire length of the cruise liner let alone take in all it offered! After marveling at the crisp, clean, and tidy stateroom for a while, we set out for dinner at The Mediterranean Buffet. The wide bay windows in the restaurant afford a spectacular view of the sea during the day. Besides the Mediterranean, there are at least two other restaurants on the ship.

An hour later, having satiated hunger with various exotic dishes, we wandered around Deck 12 where The Mediterranean is located alongside the big pool, lounge area, and the observatory. Besides these, the deck also has a library where you can access the internet, a café, a card room and an activity centre. The topmost deck has a basketball court, a mini-golf range, and a helipad amongst other things. Theatre halls, gyms, and stores with exclusive, branded merchandise on sale can be found on a lower level, along with the staterooms with varied floor plans. 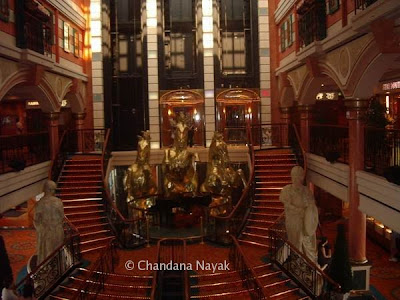 Promptly at midnight, the clanging of a bell heralded to all that the SuperStar Virgo had set sail. Everyone scurried to the observation decks to watch the lights of Singapore and Sentosa recede into the starry night. The immense proportions of the vessel ensured that no movement whatsoever was felt as it plowed into the dark sea. For some, it was time to retire for the night, while for others the night was still young and the casino and the disco beckoned. To gain entry to either of the two, you have to be at least 21 and have your IDs ready.

Early the next morning we stopped by Malacca dropping off a few passengers who had opted to go ashore on one of the offered tours. A few hours later we pulled into Port Klang and disembarked for the short trip to the malls in downtown Kuala Lumpur. We had to be back at least three hours before the cruise liner was due to sail at 11 PM.

The night flew by and so did the last day of our cruise. Various games on deck and the lounge kept everyone entertained for hours and before we knew it, we were docking at Sentosa Island. The thrilling journey had come to an end.

Cruises are now available to one and all, both in terms of affordability and accessibility. It is no longer a domain of the rich and famous. But mind you, the moment your feet are back on terra firma, the real world can hit you pretty hard!
Posted by Chandana at 7:18 AM