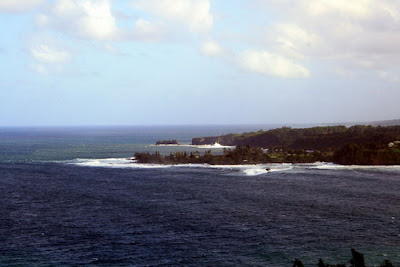 ‘Aloha’ and ‘Mahalo’—these are the two words you will get to hear the most during your visit to the Hawaiian islands. The former can mean ‘hello’ or ‘goodbye’, while the latter means ‘thank you’. The state of Hawaii consists of six major islands—Big Island, Maui, Lanai, Molokai, Oahu, and Kauai. Seeing all these islands and experiencing the various attractions that each one has would take weeks, even months. So, most visitors choose to visit one island or two islands at a time.

That is what we decided to do as well. Our choice was Maui, the Valley Isle, the second largest island in the group. The island is approximately 48 miles (76.8 km) long and 26 miles (41.6 km) wide. Known for its long stretches of beautiful beaches, pristine waters, and Haleakala Crater, Maui has been voted the best island in the world by many travel magazines over the past decade. 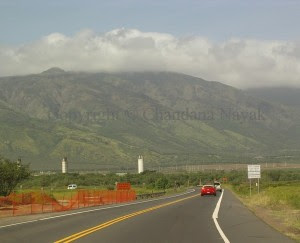 While our flight circled the Pacific Ocean, awaiting our turn to land, I could not but help compare the surrounding landscape to the one in good ol’ Mangalore. The lush green fields, the cloudy skies, and the lolling waves, all made it seem as if we were back home! As we stepped out of the terminal and headed towards the rental car office, a strong breeze blew making the weather warm but pleasant. What a relief it was to leave the cold, dreary, winter of the Bay Area far behind !!
Rejuvenated, we set out for our rented condominium in Kihei which is on the south side of Maui. One look at the view from the ‘lanai’, or balcony, and we were sorely tempted to just sit there looking out at the shimmering sea and the mountains beyond. However, we did manage to spend the rest of the day familiarizing ourselves with the island and planning out activities for the rest of the vacation. 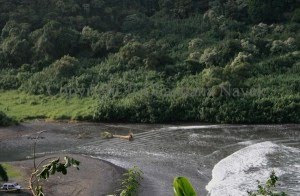 First on our list was the picturesque drive to Hana, on the eastern coast of Maui. This 60-mile drive is known for its spectacular ocean views, numerous waterfalls, and 56 narrow one-way bridges. Visitors to Maui are warned that this particular stretch of road, being narrow and winding with a couple of hairpin curves thrown in, can be stressful for the driver. We set out on the drive not knowing what to expect.

Soon it was evident that none of the authors of those numerous travel guides had ever been on the notorious road connecting Mangalore to Bangalore!! Though much narrower than the roads on the US mainland, often without the dividing center lines, the route to Hana was a pretty decent one. Frequent stops to take in the views and have a picnic lunch, made it a three-hour drive one way. 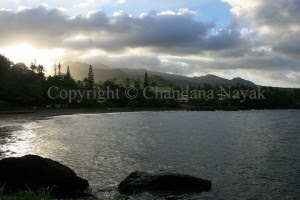 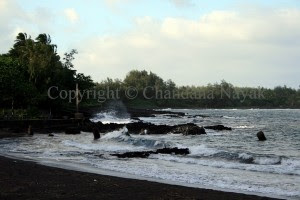 We stopped at Twin Falls, passed through tropical rainforests, glimpsed a lava beach and came across quaint cottages and farmhouses in lush settings before culminating the drive at Hana Bay. The beach at Hana Bay is also of black sand which is actually eroded lava. There is a pier here though the beach is primarily a popular venue for activities such as canoeing and family picnics. Bathed in the light of the setting sun, the glistening bay and the cloud-enveloped hillocks made for an ethereal sight. 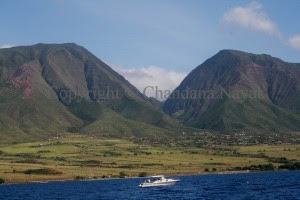 The following day, we set out for the former whaling town of Lahaina on the west coast of Maui. In the early 19th century, under the Kamehameha dynasty, Lahaina was the capital of the Hawaiian kingdom. Today it is a center for culture and arts. Front Street, which faces the ocean, is lined with shops and restaurants catering to all budgets.

As we passed the town square we could not but marvel at the ancient banyan tree which has a height of about 50 feet and is over 200 feet wide. This tree which was originally brought here from India, when it was only eight feet tall, is now the central point of Lahaina. Art and craft shows, meetings, and the like often take place in the shade of the expansive tree. 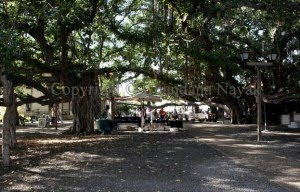 Soon we were at Lahaina Harbor, just in time to catch the shuttle-boat that would transport us to the Atlantis submarine for an underwater adventure. Since the dive site was about two miles from shore we got to enjoy spectacular views of the Maui coastline from the ocean. A sudden intensification in the motion of the sea and a change in the hue of the water indicated that the submarine was about to surface. 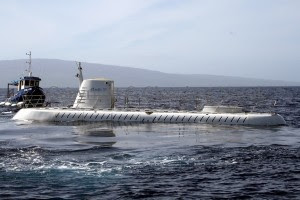 Descending to a depth of 125 feet in an air-conditioned sub, and watching schools of fish pass by with a few curious ones pressing in against the glass is definitely a unique experience. Our guide made every effort to identify each of the passing species of fish and pointed out the different kinds of reefs and marine life that were found in these waters. 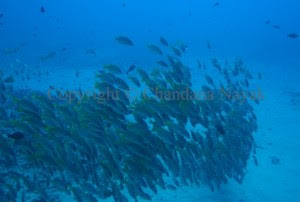