The Land of the Bamboo

It was a bleak Sunday afternoon in July when we decided to rid ourselves of boredom and make a trip to Moodbidri. Though only 37 kms from Mangalore, somehow, we had never been there as tourists.

No sooner had we driven past the city limits than it started pouring with a vengeance. As the rain lashed the windscreen reducing visibility to nearly zero, we contemplated turning back immediately. But then, in a few minutes the rain subsided just as suddenly as it had begun.

With the skies clearing, the beauty of the surrounding countryside was a sight to behold. Rain drenched trees, palm trees and fields glistened in the languid, late afternoon. Rejuvenated, we continued along NH13 and soon entered Moodbidri. The name literally means ‘eastern bamboo area’ and it is likely that at one time the region abounded in bamboo forests. 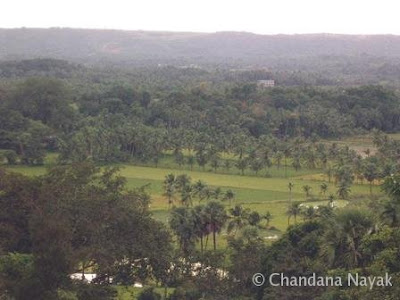 From the 14th century to the 16th century, Moodbidri witnessed unprecedented growth as a center of Jain religion, culture, art and architecture. At least 18 Jain temples, known as ‘basadis’, were constructed during this period. On a Sunday afternoon, life seemed to be at a standstill in the even otherwise quiet town. After obtaining directions from a couple of helpful locals, we found the famed ‘Tribhuvana Tilaka Choodamani Basadi’ also known as the ‘Saavira Khambada Basadi’ or the ‘Temple with thousand pillars’. This is the largest Jain temple in coastal Karnataka and was built in 1430 AD.

The magnificence of the 15th century shrine struck me the moment I stepped into the courtyard. The spacious monument exudes quiet dignity. Of the three storeys, two are made of wood and the lowest of stone. The temple is supported by a 1000 pillars as its name suggests. The steps that lead to the ‘mandapam’ or hall near the entrance, are flanked by a pair of stone elephants. The silence is such that you can hear your footfalls on the cool stone. The 2.5 metre tall idol of Lord Chandranatha Swami housed in the sanctum of the basadi is of great importance in Jainism.

Perhaps, the most striking feature of the temple is its open hall which has ornate pillars carved in the Vijayanagara style. Each pillar is a marvel in itself and no two pillars are alike. There are miniature pillars carved on these along with carved figures of people engaged in various activities such as a man beating a drum, another leading a caparisoned elephant and so on. Images of Jain Thirthankaras, Yakshas and Yakshis can also be found on the pillars. 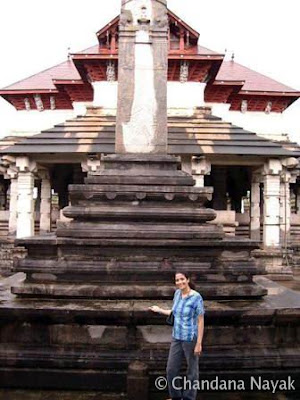 The roof also has its share of intricate etchings. Some of the carvings reflect foreign civilizations, thus giving us an idea about the far reaching trade links the region had. Near the entrance stands the 15 metre tall ‘manasthambha’. This monolith was commissioned by a queen of yore.

The town has many more Jain shrines and tombs of historical importance as well as Hindu temples and even the remains of an ancient palace. But by the time we were through marveling over the basadi, the sky was again darkening and we had to be content with a few glimpses in passing by these sites. Reluctantly, we made up our minds to visit charming Moodbidri once again.
Posted by Chandana at 5:32 AM