Sinhagad - Sentinel of a Bygone Era 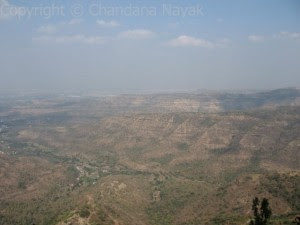 A pleasant, wintry afternoon in January saw us trudging up the steps to Sinhagad Fort, previously known as Kondhana. Stomachs rumbling with hunger is not exactly the right way to embark on a trek of any length. However, the fame of the authentic Maharashtrian cuisine served to visitors at the ‘Fort of the Lion’, courtesy the locals, was too tempting to resist.

A variant of the ‘dhabas’ that have now become popular all over the country, these small makeshift eateries are the place to visit if you like the traditional ‘Jhunka-bhakar’, ‘kanda-bhaji’, and other mouthwatering delicacies accompanied by ‘matka dahi’! 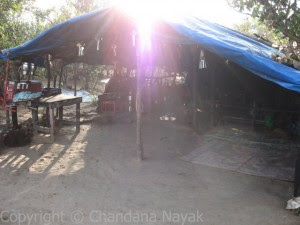 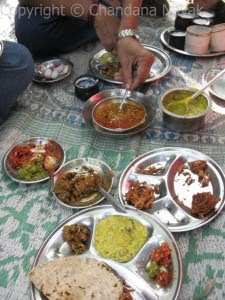 Having satiated our hunger and rejuvenated ourselves with the refreshing buttermilk, curds, and the sweet water which is a specialty of the region, we made our way to the top of the fort. Located amongst the Sahyadris at more than 4,400 ft above sea-level, Sinhagad is a former bastion of Chattrapati Shivaji. 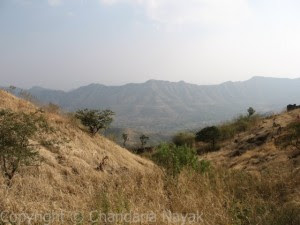 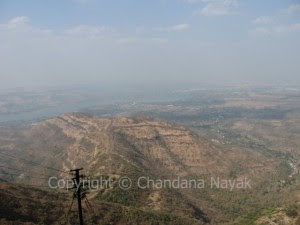 He won the fort in an epic battle due to the valour of his general Tanaji Malusare, who lost his life in the battle. On hearing of Tanaji’s death, Shivaji said "Gad aala pan sinha gela" meaning "We gained the fort, but lost the lion". Thus, the fortress was given its current name in honour of the war hero. 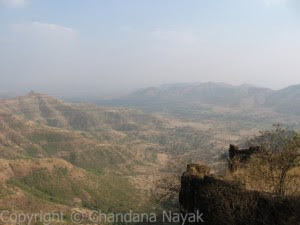 Looking back down the way we had come, I could see the Mutha River winding its way in the distance. The Khadakvasla dam is built on this river. Making our way into the fort through one of the two main entrances, the first things we came across was the tank used for storing the sweet drinking water which we sampled earlier.

All along the way, the views were simply breathtaking-the windswept, striated rock and sand formations that stand tall and still. 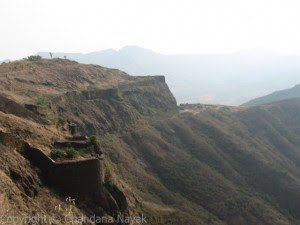 Peeking over the guardrails, it was easy to see why the fort was considered impregnable. The steep cliffs had all along safeguarded the fortress except when Tanaji and his men decided to scale the rocks with the help of a giant monitor lizard in their successful attempt to take back the fort from the enemy! 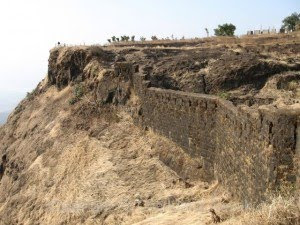 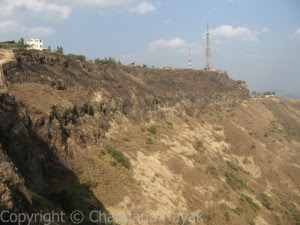 Gazing upon the ramparts, some in ruins and others still standing strong, I could picture in my mind’s eye the gallant warriors in battle gear, and horses’ hooves clattering upon the stone walkways and steps.

And beyond the walls of the fort were the spectacular peaks visible in the distance, and the valley far, far below. It was east to guess that they would present a magnificient sight when viewed in the monsoon with greenery greatly enhancing the vista. 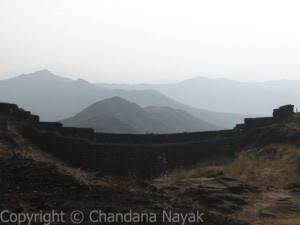 On our way back, we also came across the house used by freedom fighter Lokamanya Tilak who had spent summers here writing. The fortress also has temples and a memorial to Tanaji. 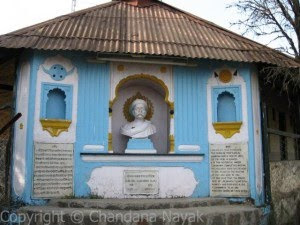 As we walked down the steps, the sun had lost much of its vigour and a gentle breeze wafted across bringing an adventurous day to a peaceful end.
(Photos By Upendra Nayak & Chandana Nayak Shenoy)
Posted by Chandana at 9:31 AM