It is my personal opinion that one’s first view of Las Vegas, the gambling capital of the US, should be at nightfall. Irrespective of whether it is your first visit to Sin City or your hundredth, you cannot fail to be mesmerized by the grandiose casinos lit up with hundreds of thousands of multi-colored lights, blazing neon billboards, and glittering facades. Throngs of humanity pour in and out of the various casinos and restaurants, and spill onto the pavements and the streets.

The city is a popular adult weekend getaway through the year and sees millions of visitors from all over the world. Situated like an oasis in the midst of the Mojave Desert, Las Vegas literally means ‘The Meadows’, in Spanish. This railroad town has come a long way and has been featured in numerous movies and television shows, both domestic and international. All the famous casino-hotels are located along a four mile stretch of Las Vegas Boulevard South, popularly known as ‘The Strip’. 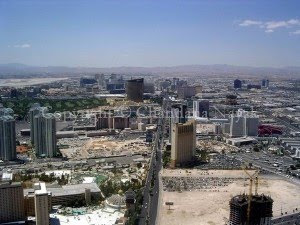 Gambling is of course, the chief attraction here and even the biggest miser cannot resist feeding the slot machines a few dollars just to listen to the tinkling music and see the spinning counters. But if you go there dreaming of walking out with a jackpot, be prepared to be disappointed. Vegas slot machines have the notorious reputation of rarely rewarding eager visitors. 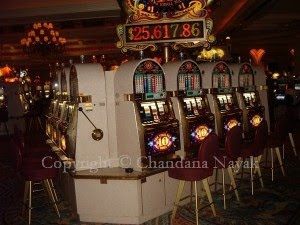 The blackjack and poker tables, however, are a different matter altogether. This is where luck and skill go hand in hand. Many fortunes are made and lost here each day. The lowest bets in the major casinos start around $5 and keep going up depending on the tables you sit at. The high stakes tables are cordoned off and only the ‘real’ players dare go there!

A couple of days is too little time when visiting Vegas as there is so much to see and do. Each casino is built around a particular theme and these themes are reflected in the names of the casinos, which often represent entire cities. Circus Circus, MGM Grand, Caesar’s Palace, The Bellagio, The Venetian, Luxor, Paris, New York-New York, Excalibur and Tropicana are but some of the names that come to mind when one thinks of Las Vegas. Each of these are architectural wonders in their own right. 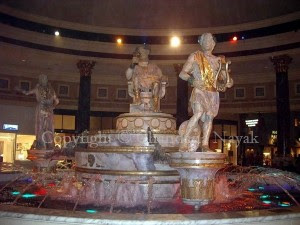 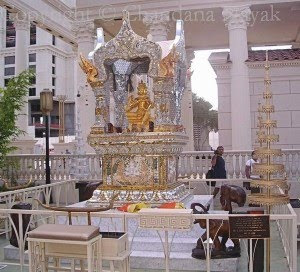 Caesar’s Palace is modeled on ancient Rome and looks like a Roman palace on the outside. Inside there is a multitude of fountains, paved roads, and blue skies. This casino also has a shrine dedicated to Lord Brahma near its entrance. The Venetian, as its name suggests, is a smaller version of the city of Venice complete with a canal along which visitors can take gondola rides. The gondolier’s songs echo melodiously all along the route. The Bellagio has a conservatory and miniature trains and models besides its musical fountains that entertain visitors throughout the day. 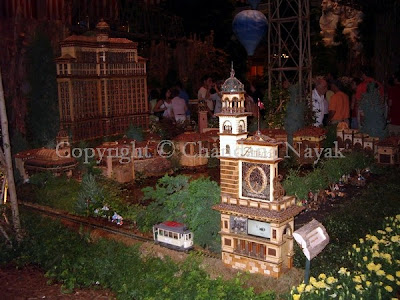 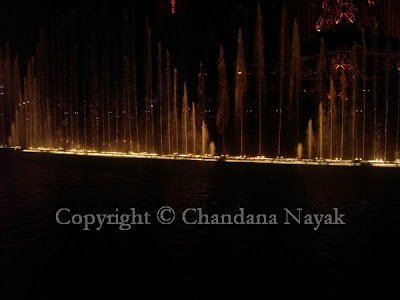 Circus Circus has circus performances going on through the day and night. This casino- hotel also has numerous games and shows targeted at children who go home happy with the many soft toys and other prizes that they win. Excalibur is modeled on an English castle and has knights in armor who perform in jousting shows. The Luxor has an Egyptian theme and the building itself is in the form of a pyramid. 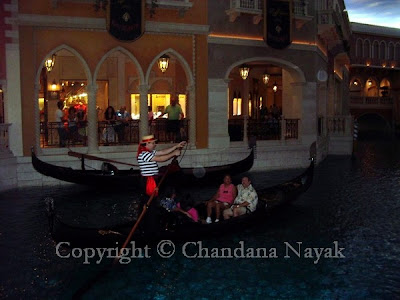 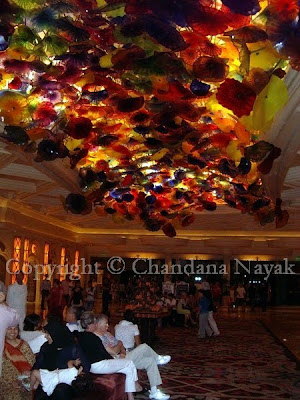 The Stratosphere has a viewing tower which from a height of 1,149 feet, provides a magnificent view of the entire city and the mountains in the distance. This is said to be the tallest freestanding observation tower in the United States. As if this wasn’t exciting enough, there are a couple of thrill rides from the outside of the tower! Certainly not for those with vertigo, or a fear of heights. 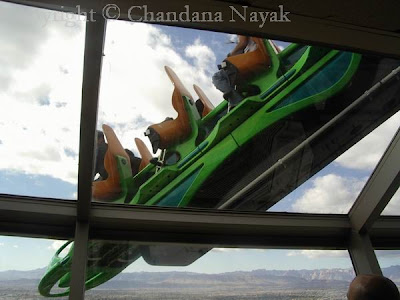 The MGM Grand has the lion as its mascot and on the casino floor is a huge glass enclosure with a real, live lion striding majestically inside it! Mandalay Bay has an entire underwater aquarium known for its shark reef. All the casinos also have numerous shops with expensive merchandise from top designers such as Gucci, Cartier, Chanel, and Calvin Klein, amongst others.

Upscale nightclubs and restaurants dot the casinos. As the night progresses, pulsating music flows out of the various nightclubs with their flashing strobe lights. All these hotspots have their own dress code and if you are not appropriately dressed, it’s likely that you’ll be denied entry. Each casino also has at least one auditorium with famous personalities from various fields performing here. Britney Spears, Elton John, Celine Dion, Roy and Siegfried, Robin Williams, and Michael Jackson, are but some of the celebrities associated with Las Vegas shows over the years. 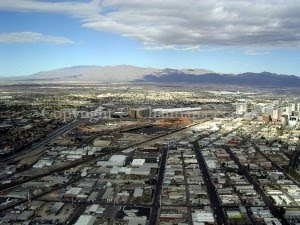 Las Vegas is also famous for the regular boxing matches or fights that are held in its casinos. A must see attraction are the live entertainment shows that take place in each casino at scheduled times every day. You get to see the famous Las Vegas showgirls and their dance routines, besides stand-up comedy, and various other acts.

Sin City is very visitor-friendly and transportation facilities abound here. A monorail connects all the casinos on the strip and visitors have the option of buying a variety of passes for travel depending upon their duration of stay and their convenience. Free shuttles also run between many of the casinos.

Walking in Las Vegas is a pretty good experience too, since there are numerous footbridges on the strips ensuring that you don’t have to cross the road in the midst of traffic. What makes these footbridges even more appealing are the escalators that give our poor, tired, feet a momentary rest. Many of them are interconnected with automated walkways thus ensuring that we stay out of the sweltering heat as much as possible.

When planning a trip to Las Vegas, make sure you are not on a tight budget. Accommodations range from modest to ultra luxurious. Staying in one of the casino-hotels, like most people do, is more expensive than staying in a regular motel. It is part of the experience and hence, justifies the splurging. Also there are usually added benefits like free passes to the casino’s live shows and discounts on meals. Irrespective of the manner in which Lady Luck treats you, be sure to make the most of your trip to this memorable place. For, as the ad slogan for Las Vegas tourism says, ‘What happens in Vegas….stays in Vegas’!
Posted by Chandana at 8:15 AM