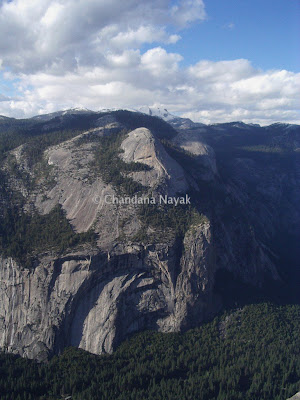 Being blessed with thousands of acres of wilderness, there is no dearth of national and state parks in America. Yosemite National Park, sprawled across Mariposa and Tuolumne counties in the state of California, is one such example of nature’s bounty. Native Americans have inhabited the Yosemite region for more than 8,000 years. Covering an area of more than 3,000 square kilometers, Yosemite is a World Heritage site known for its magnificent granite cliffs, numerous waterfalls, plentiful streams, and the Giant Sequoia groves. The elevation in the park ranges from 2,000 feet to more than 13,000 feet giving visitors the opportunity to see glaciers at certain points in the park. Irrespective of the season during which you visit, there is something for everyone to do all year round.

Camping enthusiasts would be thrilled to spend a few nights inside the park in the tranquil company of nature. Advance reservations are required for overnight camping and for this very reason we had to be content with a campsite at Bass Lake, about 45 miles from the south entrance to Yosemite. The drive to the park was tree-lined and deceptively devoid of any traffic. The last half mile to the park entrance however, told a different story with cars, campers, and RVs queuing up for the admission tickets! Inside the park you can just drive to the various lookouts and picnic spots, or you can choose to take a break from driving and hop on and off the free shuttle buses that ply through the park. 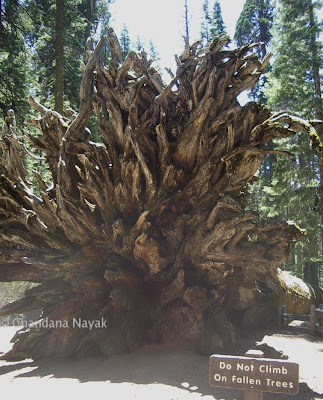 Our first stop was Mariposa Grove, which is the largest grove of Giant Sequoias within the park. Botanically known as Sequoiadendrum Giganteum, they've been around since the time of dinosaurs—about 70 million years ago! Though the dinosaurs became extinct, these giants have survived through the centuries. The average lifespan of these trees is from 1,000 to 3,000 years. One of the sequoias in the grove, the Grizzly Giant, dates back more than 1600 years and is the oldest here. With a height of 206 ft and a basal diameter of 29 ft, the Grizzly Giant seems to soar endlessly overhead. The grove is home to numerous such massive trees with varied such distinctions to their credit. The grove also has many fallen trees which continue to look magnificent even in death. Driving on to Washburn Point we came across numerous scenic vistas vying with each other with their spectacular combinations of snow, varied foliage, and crystal clear water. 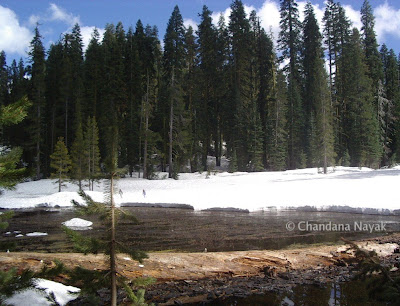 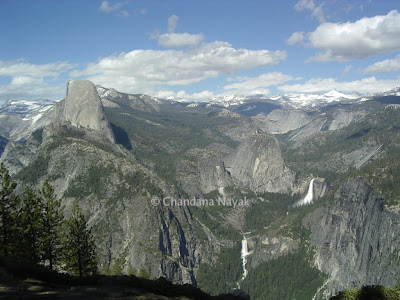 ‘Awesome’ would be the word to describe the view from Washburn Point. The waterfalls fed by melting snow, cascading down the grey surface of the massive granite rocks made for a picture postcard effect that left us gazing upon it with not a thought to time. Vernal Falls, Nevada Falls, Half Dome, and Clouds Rest, are all visible from this lookout. Half Dome, with a height of 4,737 ft is a favorite with hikers and rock climbers. A little ahead, we came upon Glacier Point which offered a great view of the gushing Yosemite Falls and the rich, green, Yosemite Valley thousands of feet below. Yosemite Falls is the highest measured waterfall in North America and is at its peak in early spring. 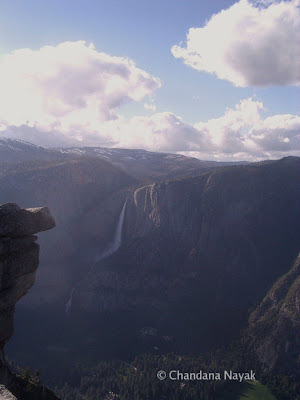 Yosemite Valley is situated at a 3,200 feet drop from the lookout at Glacier Point. The valley extends up to seven miles in length and is about one mile wide and abounds in forests and open meadows with the Merced River flowing through. Visiting the whole of the valley or hiking the many trails found there would constitute an entire vacation in itself!! Deciding to be content with the breathtaking views we witnessed and the spectacular landscapes captured through our camera lens, we left the adventures of Yosemite for another day.
Posted by Chandana at 8:07 AM