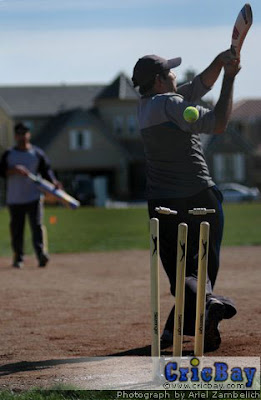 Cricket is not just a game for us Indians; passion might describe it better. So, it should not come as a surprise that cricket enthusiasts in the Bay Area, here in the US, have carved out a league of their own. A group of them put their heads together and came up with the idea of a tennis ball cricket league in March 2006, organizing different tournaments all through the year. CricBay (Cricket in Bay Area) has ensured that there is plenty of cricket to go around!

What is unique about this league is that there is no formal governing body or committee to regulate and manage the teams and events. Volunteers from the participating teams are responsible for deciding the venue, setting up the field and communicating all necessary information to the players. Another interesting tidbit — quite a few of the players and volunteers hail from Dakshina Kannada. 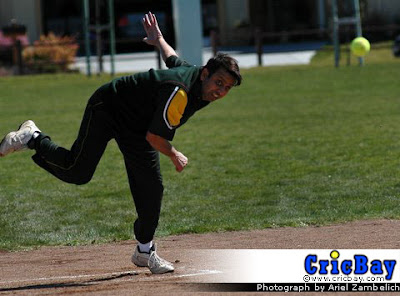 "CricBay is a dynamic volunteer league providing framework/support to like-minded cricket teams. It's a fantastic democratic organization which will continue growing to enable years of fun, competitive, tennis ball cricket in the Bay Area. Thanks to all the hardworking volunteers who have accomplished so much with so little,” says Jignesh Trivedi, captain of the Dixon Landing Dawgs.

Suraj Dalvi, manager of the Weekenders, couldn’t agree more. "Transparency of finances and having a say in the rules and regulations are the reasons why I would claim that CricBay is one of the best cricketing organizations,” adds Dalvi.

The league has three major tournaments every year — Regular Season, Playoffs, and Fall Open. The league follows a quasi-knockout format wherein teams play for each position on the ranking ladder. This means that all teams play about the same number of games as the winning team. 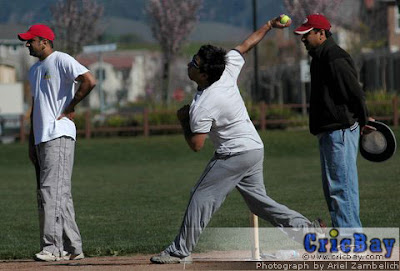 Anand Lakshmanan, vice-captain of the Weekenders, feels the concept of losing teams continuing to play for other positions is ideal since “this takes away the nightmarish logistics of the team management trying to find a team to play every other weekend. This also ensures equal amount of fun for the winning and losing teams till the end of the season and urges the teams to remain competitive.”

Most matches are held on the home ground of one of the two participating teams whereas the umpires would be from two other teams from the league. This helps ensure impartiality and speedy resolution of disputes that might arise during the course of a game. The schedule is planned keeping in mind umpiring assignments and a few rest weekends in between to provide for rescheduling of abandoned games. Umpires for the semi-finals and finals are chosen from those nominated as the best by the teams during the course of the playoffs.

Sunil Shenoy of Kaup is yet another person who has been dedicated to the cause of cricket in the region and CricBay. Shenoy’s love for the game is evident through the website www.cricbay.com which has been designed by him. CricBay.com has an efficient cricket statistics management system that keeps a tab of all the matches organized by the league. Rankings, scores, match schedules and team lists are all available on the website which is being improved upon with each passing day (www.cricbay.com).

This website also acts as a forum for discussion and interaction between the member teams (http://www.cricbay.com/volunteercommunity.asp). Shenoy hopes to have the software fully developed sometime next year.

Some excerpts from an interview with Sunil Shenoy.

1) Who came up with the idea of such a cricket league?
There are a lot of teams in and around the San Francisco Bay Area. We (the teams) got to know each other through tournaments and felt the need for a democratic community to arrange cricket matches and bring the teams together. That is how in early 2006 we decided to start CricBay.

2) What prompted you to set up such a website?

Cricket is a passion for most Indians and I am just one of them. Web development and design is also a passion of mine. A couple of years ago, the idea of developing a user-friendly online portal to maintain cricket statistics came to me. Since then I have been working on the cricket statistics system step by step. The formation of CricBay speeded up development of this system. With priceless inputs and contribution from our SQL guru Anil Rao, the process has been smoother and swifter.

3) How many teams does CricBay have?

We started off the first tournament, CricBay Regular Season 2006, with 28 teams and this year the number stands at 68!

4) Does every player have a login/id on the website or only the team captains?

Anybody can register on CricBay.com (http://www.cricbay.com/register.asp). A player must have a registered account on CricBay.com to enter his scores. The access to materials on the website is limited to the role assigned to the user. For example, the team management has the ability to add/remove players from their team; the volunteers have access to a privileged set of documents, and so on.
5) How are disputes and issues resolved?
CricBay has communities (listed on http://www.cricbay.com/volunteercommunity.asp ) that handle all CricBay activities. Any CricBay member can also be a member of these communities. The disputes are handled by the Community for Rules and Appeals (CoRA). If there is any dispute, the team captain, the manager, or the umpires officiating the game, report it to CoRA by email (we are in the process of developing an automated system on cricbay.com to handle this process) which in turn passes judgment after listening to all those involved.

6) What other features do you plan to introduce on the website?

Ever since its launch, CricBay.com is being improved everyday thanks to inputs from fellow community members. There is constant development and every day new features are being planned or added. I would not like to specifically list out the new features that are coming up but want to urge visitors to the site and members to keep a watch on CricBay.com. There are numerous features being added and there seems to be no end to development of CricBay.com at this point.
Posted by Chandana at 10:49 PM